Net neutrality in the age of bankers 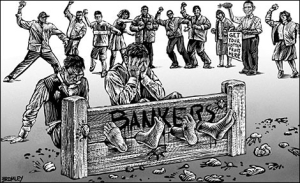 Should banks and financial institutions be considered like OTTs an therefore charged for the simple use of telecom networks and Internet?

This questione came to me today at the yearly FT-Etno conference, an event most self-referential than a birthday party. At the end of a panel discussion about telecom investments, some bankers were inquired about the net neutrality debate in the EU. Their frank response was: “Well, Internet is like a motorway, the owner of the infrastructure has control over it and therefore it must be entitled to charge the users depending of the traffic”.

The response of the bankers was not accidental, it was clearly aimed at supporting the traditional telco’s vision about net neutrality with regard to the possibility to charge OTTs and other Internet service provider (Google, Netflix, Apple ecc). However, the bankers probably underestimated the fact that the correct parallelism with motorways does not bring to their conclusions: by contrast, in the motorway business tolls are charged upon drivers, eventually depending on the size of the cars, not on transportation services or cars manufacturers. Companies like DHL (a service provider) or FIAT (a car manufacturer) do not have to contribute to the investment for the construction of the motorway: their cars (the equivalent of bits) just pay the toll at entrance and that’s all, they do not have to pay a double/additional bill just because just their business is passing through the motorways. In other words, the motorway business works exactly in the way NN supporters believe Internet should work: no fast/slow lanes, while charges are levied only upon users, eventually depending on their traffic usage, not on OTT, content providers just because their business is Internet-based.

One should not exaggerate too much against bankers and financial guys trying to explain how the Internet works, maybe it was just an accident. However, the idea according to which Internet providers should be charged for the simple fact that they run a business over the Internet open the doors to unthinkable (for the bankers) consequences: all the business of banks and financial institutions is ran over the Internet, billions of economic transactions and payments are managed thanks to networks of telcos and access providers. Should banks be charged for that? If one think that Google and other OTTs should pay, I believe that HSBC and financial institutions should do the same, for the same reasons…..

← #OMGoettinger! Good or bad news for the Digital Agenda?
Net neutrality and competition rules are getting closer and closer →