The Netflix/Comcast deal: nothing to do with Net Neutrality? 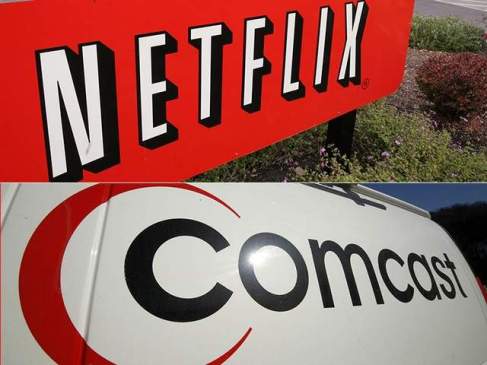 Today the press is reporting about a deal between Netflix and Comcast, which will allow the movie provider to connect directly to the network of the broadband provider. I understand that this is a direct peering agreement, but not for free (as it often happens in the peering environment), since Netflix has committed to pay Comcast for the disturb (details of the price are not public).

By virtue of this agreement, Netflix’s subscribers will enjoy a better quality when watching their movies. In fact, Netflix stream services will be conveyed to subscribers directly to them  and will not pass through other networks and long routing – unlike now, since most of Netflix’s movies were normally transmitted via Cogent, a carrier which then delivered the traffic to Comcast.

The deal between Netflix and Comcast seems therefore a normal commercial transaction, since content providers may have the choice to connect directly to the network of their users or instead to deliver traffic to a carrier, which will do the rest directly (via own peering agreements) or via further carriers. As far as we know, this was a pure commercial decision, which had to take account of various factors: the coverage of the ISP and its customers base, the routing architecture, the price negotiated amongst the parties, the alternative price to be negotiated for transit. Of course, Netflix will not make direct peering agreements with all ISPs of the world, because it will be impossible and insane. However, it make sense to negotiate such a deal at least with the main BB providers, including Comcast – the latter being the main provider in the largest market for Netflix – if the price is fair. Comcast’s customers will have a benefit from that, because they will enjoy better quality when watching Netflix’s movies, as the streaming signal will be delivered directly to them without too many loops and routing.

One could argue whether this deal has something to do with the NN debate. It depends whether Netflix’s decision was driven by autonomous commercial decision or by the potential threat by Comcast to restrict the video-streaming traffic to its subscribers.

In the previous case, this deal should be seen as an alternative to a solution altering the neutrality of the net. In fact, Netflix’s traffic will not be prioritized, privileged  or favored, therefore net neutrality remains “safe”. By contrast, some “quality” effects will be perceived by the users because of the network solution in place permitting to the video stream to reach households with less potentially congestion points. Thus, this kind of deal demonstrate that most of the arguments against net neutrality are fake or inconsistent, because:

(i) in order to provide enhanced quality to end-users, it is not necessary to prioritize, discriminate, impose bandwidth caps ecc ecc; it is sufficient to arrange the Internet traffic via different routing or peering agreements;

(ii) it is a pure commercial matter – if the price is fair it may be done. No need to regulate;

(iii) it is up to the content provider, OTT or end-users to decide whether a given quality may be desirable, and then the market will provide offers and solutions. By contrast, the entire net neutrality debate in Us and especially in the EU is whether specific “specialized” services should be guaranteed or recognized by regulation, even when nobody in the market is asking for that!

One should investigate the reasons why Netflix decided to close this deal. If, for instance, the deal was forced because of traffic congestions artificially created by Comcast, the scenario becomes more complex. Interesting to see, there are news that also At&T may be interested to close the same kind of deal with Netflix.

In addition, one should consider potential problem deriving from the changing landscape in the US ISP market. If Comcast will succeed in buying the competitor Time Warner, then it may become dominant in the Internet access market in US and it may be tempted, as a consequence, to abusively rise peering fees (to Netflix or any other content provider or carrier) or discriminate. In such a case, a competition or regulatory issue may arise.

UPDATE 29 APRIL 2014: Netflix has announced to have executed a similar direct paid agreement with Verizon. This is a sign that the competitive landscape is changing. The question is whether the deal could be seen as a pure commercial move or there might be previous behaviors from Verizon (such as artificial shortage of bandwidth) which have forced Netflix to enter into the peering agreement. Commercial details of the deal are not public.