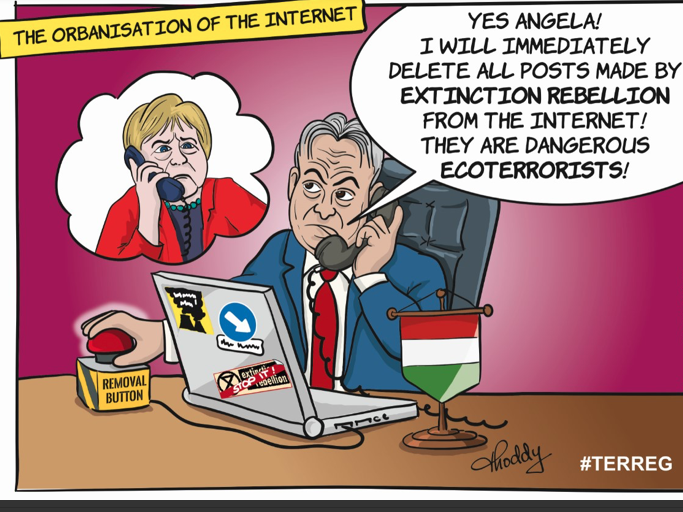 Without making too much noise, on 29 April, 2021  the European Parliament gave the green light to the so-called TERREG regulation, i.e. the European legislation designed to counter the spread of terrorist content online through the EU. In practice, in order to prevent the dissemination of terrorist propaganda material via the Internet, Member States are authorized to impose the removal of such online content with an unusual speed: 1 (one) hour.

It could seem a proof of due efficiency in the face of the dangerousness of certain phenomena such as online terrorism, but if we then reflect on the application methods, the picture becomes obscure: the authority in charge of this function could also be simple police offices and the concept of “terrorist content” is by definition subjective and unclear. In other words, should a Member State appoint as Interior / Home Minister a political figure with sharp methods and even flexible ideas on the rule of law, the application of this regulation could become funcy. The TERREG applies not only to social platforms, but also to websites and simple blogs. To give an example taken from the concrete Italian news, if in certain circumstances a boat of illegal immigrants can be considered as a foreign invasion force by the Home Office, then even the definition of terrorism on the Internet could become a bit loose.

But the case can become even more complicated, because the TERREG regulation was also designed for transnational cases. In other words, the authority of any EU country may request the removal of online content (posts, publications) that are uploaded by a person having servers in another EU country. For example, the Italian judicial police could request the removal of content, published on a French site, which deal with attacks in Italy: it could be actual terrorist propaganda or a simple analysis of the Mitterand doctrine, however the initial judgment will probably be up to simple police offices, not even a judge. Examples do not stop there: a Hungarian ministry could ask an Italian provider to remove some content that shows Orban’s face with a Hitler mustache; or to cancel a speech by the billionaire Soros, who is not welcomed by the national government; or, finally, to close the page of an NGO that helps migrants in the Balkans. All contents that in Budapest, when the tension rises, could be labeled as “terrorists”.

In fact, there is no univocal normative definition to define a content as “terrorist propaganda” and it is objectively difficult to agree on a legislative definition. In the end, it will be the authority in charge of carrying out this assessment, while the authority of the country of destination (where the person who published the post in question is located) will probably be limited to acting as postman. In short, the phrase “there is mail for you” could in the future be a harbinger of real surprises for social platforms, websites or simple blogs, especially if a threatening letter from a Hungarian minister from Orban came out of the envelope. Also this blog could become a target, by the way.

The issue of spreading terrorist content online is tremendously serious and in fact the proposal for the TERREG regulation was supported by France and Germany, which are certainly countries that respect civil rights and freedom of the press. But even in France a similar law, the so-called the “Avia” law had been declared unconstitutional by the Conseil Constitutionel precisely because it was considered to be detrimental to freedom of expression. In other words, we are in a field where identifying a balance point between the various interests is extremely complex. It is therefore surprising that the European Parliament gave the green light without even a debate in plenary (it seems to have been a procedural incident).

Therefore, in the future Europeans will have some more good reason to entrust delicate governmental posts, such as the Home Minister, to politicians or technicians who are credible enough to respect the rule of law and democracy. What is more, we may begin to come across requests from foreign authorities, completely unknown, who claim as terrorist content that, in our home, does not seem so at all. The case of Orban may seem the most striking at the moment, but let’s not forget that the label of “terrorist” can appear wherever there are turbulent regional minorities (Spain), large disparities of views on what is democratic or not (Poland and Hungary), deviant opinions on the subject of a pandemic (Germany), or prejudices about minority religious communities (a bit everywhere). In other words, so that #TERREG does not become a monster, the European Union and its Member States will have to raise the threshold of attention towards respect for the rule of law and democratic principles within itself. If another Member State were to start an authoritarian drift, this could immediately become a problem in our country too, and we will find out by post.

Here a sharp analysis of the TERREG Regulation article by article: